5-Hour Energy: Tastes Terrible. It looks Weird. And It Kills... its Category.

Last year, more than one billion “energy shots” were sold in the US—almost all of them were part of the 5-hour Energy line. The closest competitor sold just over 17 million units, or a little less than 2% of the market share–the other 18 competitors fare much worse.

In many ways, 5-hour energy has no business being so successful. The packaging is gaudy, it claims no celebrity endorsements, and it tastes like the cough syrup I took as a kid. It clearly was not developed through needs analysis or other traditional market techniques.

The genius of 5-hour energy is that it captured a “job to be done” According to “jobs” theory, people do not buy products or services—they hire them to do a job. The classic example is that no one ever really set out to buy a one-quarter inch drill bit, they set out to drill a quarter-inch hole.  (See Jobs To Be Done.) 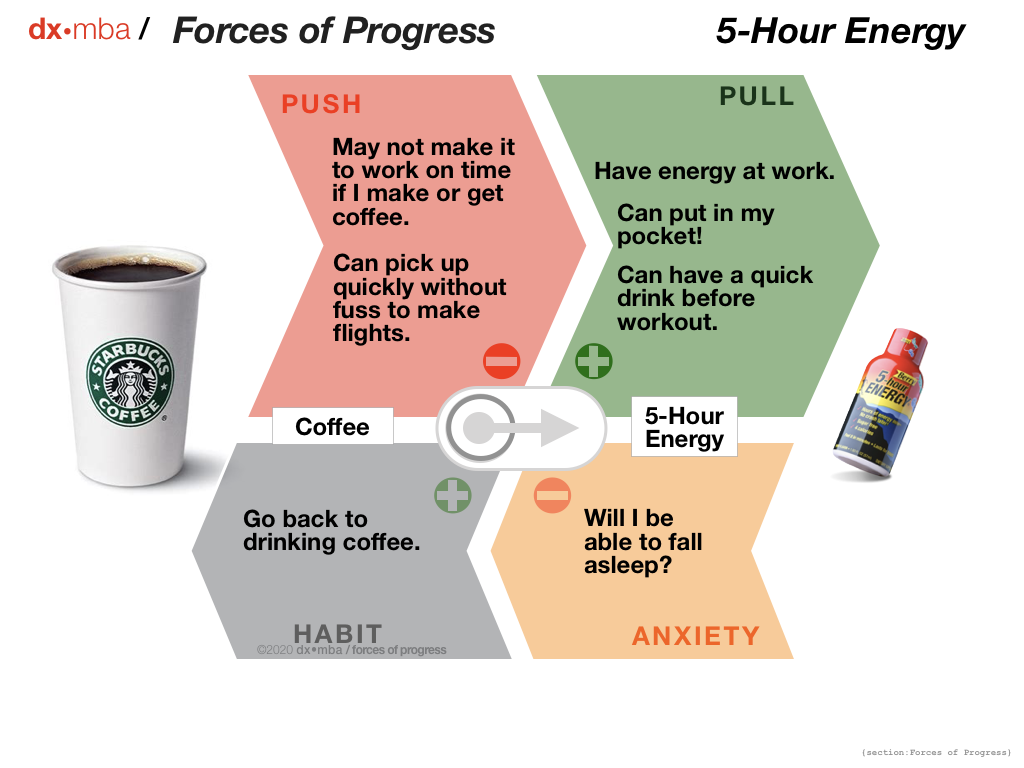 At a deeper level, what this means for innovators and marketers is that they must replace a customer-need and product-benefit mindset with a “circumstance of struggle” mindset. What do I mean by the circumstance of struggle? I’ve hit the early afternoon slump, but I’ve still got lots of work to do. When I get home I need to get dinner ready for the kids or go to the gym or whatever. For years, there were many things we used to resolve this struggle: willpower, coffee, a candy bar, a nap, etc.

But then in 2004, many of saw a low-budget commercial that promised, “If you want to get out of that afternoon slump and not hit the inevitable sugar-crash later, try 5-hour energy.” They placed the product where we experiencing the struggle (like at a convenience store buying an energy drink) and we tried it. Though actual sales figures are not publicly available, plant utilization and staffing models indicate that in that first year many millions of us tried 5-hour Energy and that demand was growing.

Since then, the product has remained much the same. 5-hour Energy absolutely dominates a field of at least 20 competitors because it nailed the “job” perfectly and didn’t stray. It still fulfills the job of resolving a slump in energy without too much of a subsequent crash.  Basis Of Competition

Of course, customer needs and product features factor into the success of 5-hour energy. However, those needs and features are clearer and easier to specify when framed from a “jobs” perspective. In an interview with Forbes, Manoj Bhargava, the founder of 5-hour energy, remarked that as he sought to resolve his problem of the afternoon slump he asked himself, “If I am tired, am I also thirsty?” It turns out that by framing the problem from the circumstance of struggle, he realized that his product should only be a couple of ounces.

By using jobs theory and identifying first the struggle (which includes many needs) and the circumstance under which the struggle arises, this gaudily-packaged, cough-syrupy stuff created and continues to dominate a multibillion dollar market.

See also The Job that 5-Hour Energy is Hired For.

5-Hour Energy: Tastes Terrible. It looks Weird. And It Kills... its Category. and our other posts are constructed based on the principles we teach in our live, online Innovation Science Bootcamp.