Public officials have had varied responses to the emergence of 19nCoV.

In this post, I’ll be looking at the governor of New York, Andrew Cuomo, since he has done nearly daily public briefings. This is not an evaluation of whether he’s done a good job. Rather, this entry addresses the Tools of Cooperation he’s employed to get people to comply with the order for strict mitigation measures.

To use the tool, we take a specific issue and two parties—two individuals, two groups, or a group and an individual—and plot the extent to which they agree. So, for social distancing and other measures, we can plot the degree to which Governor Cuomo and his constituents agree about

For ease of use, we break the diagram into 4 quadrants, each quadrant comprises a group of tools that are similar in their requirements and characteristics. 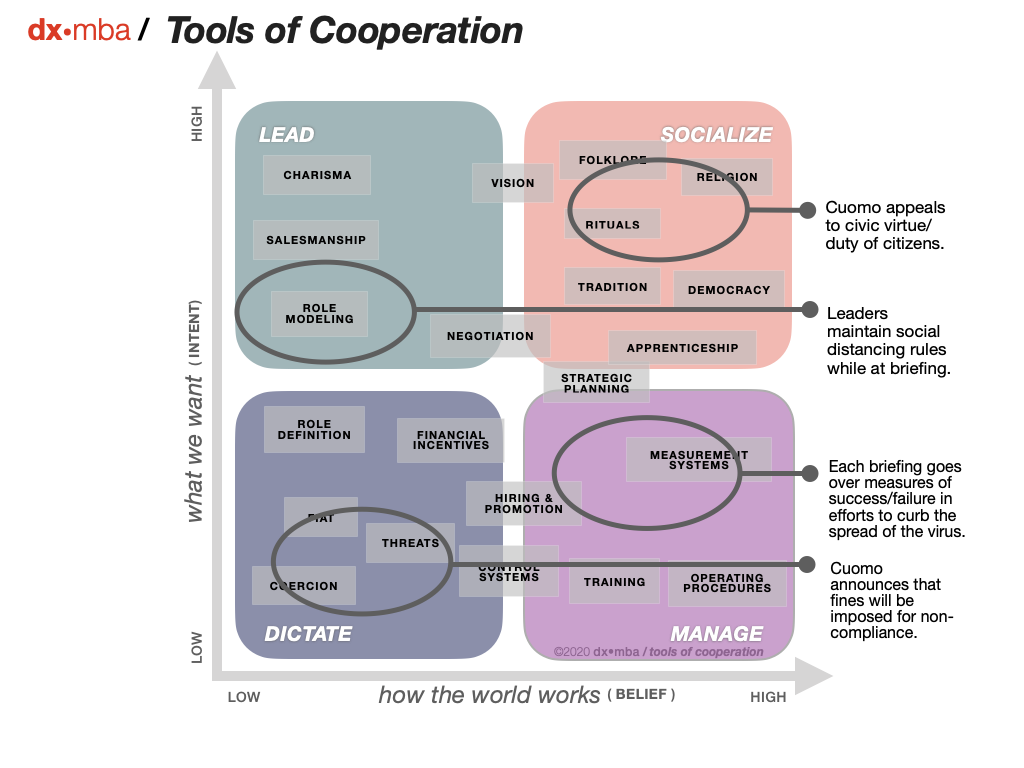 Once we know the issue and understand the parties’ pre-existing degree of agreement, we can plot it in the diagram to see which tool(s) will be effective in getting people to cooperate—to coordinate their actions to achieve an outcome.

In preparation for this example, I watched a few of Gov. Cuomo’s news conferences. Interestingly, he employs more than one tool as he tries to get people to comply with the mitigation measures.

I have seen him use tools in the “socialize” quadrant. He appeals to what one might call civic religion: we are a community that looks out for one another, so stick to the guidelines for the sake of others.

I have also seen him use role modeling from the “lead” quadrant. He and the other briefers sit at least 6 feet apart from each other.

His daily run through the numbers is a tool from the “manage” quadrant. This works like an informal measurement system intended to teach people the consequences of their actions—for good and ill.

Finally, I witnessed a briefing after a weekend where spring weather had brought people out in large numbers, many of whom ignored social distancing guidelines. Cuomo resorted to the “dictate” quadrant through a coercive threat of tripled fines for anyone violating the rules.

Cuomo's Tools of Cooperation and our other posts are constructed based on the principles we teach in our live, online Innovation Science Bootcamp.